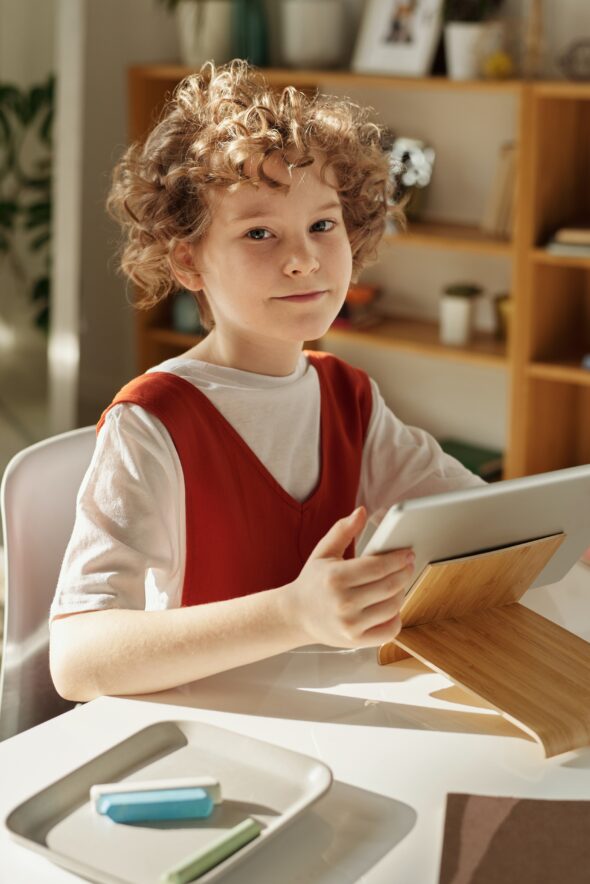 How Much Screen Time Is Enough For Kids?

It’s no secret that staring at the screen too long can cause some serious eye fatigue — we all know that feeling of tired eyes (or asthenopia) after a day spent in front of the computer. But with the plethora of devices in our lives these days, it’s no longer just grown-ups with desk jobs spending too much time on a computer. Kids are getting more than their fair share of screen time too, from watching shows on an iPad before school starts to classwork done on a computer. But when pretty much everything is happening on devices, how much screen time is too much for growing kids?

The American Academy of Child and Adolescent Psychiatry recommends no screen time at all for toddlers and babies under 18 months except quick video chats with relatives out of town. Between 18 and 24 months, screen time should be limited to educational programming with a caregiver. From 2 to five, the AACAP recommends that non-educational screentime be limited to about an hour per weekday and three hours on weekend days; from ages 6 and up, it’s best to “limit activities” containing screens.

More than 70% of parents are worried about their kids having too much screen time, according to Pew Research Center — and from the data, it looks like they’re right to be concerned. Right now — and not including schoolwork — children in the United States between the ages of 8 and 10 are engaged with screens for an average of six hours per day. Between the ages of 11 and 14, it’s up to nine hours a day, and from 15 to 18 years old it’s usually seven and a half hours per day.

According to scientists, kids’ brains are developing rapidly, and much of this initial learning is through exploration and observing adults in their environment. Looking at a screen narrows the focus of their interest to a screen and doesn’t let this crucial learning take place in a natural, organic way.

Disruption to normal brain development continues and has an effect on kids’ academic performance, not to mention mental cognition. National Institutes of Health study, kids who spent more than this scored lower on language and thinking tests. More than seven hours a day, and their brain experienced physical effects as well with a thinning of the cortex, where critical thinking and reasoning take place.

There are antisocial effects as well — even when it comes to everyday interactions.

“Impatience in real-world interactions is one of the biggest results of excessive screen time,” Dr. Samina Yousuf, a pediatrician, told OSF HealthCare. “You don’t have to be patient with a screen. It’s instant gratification. But you do need patience when you’re talking to someone in person. So, it’s important that children learn to wait, listen and respond.”

Of course, it’s not just their cognitive development that suffers but the part of the body focusing hard on the screen all day: Eyesight can take a hit with too much screentime, which is something parents have been especially worried about since the start of the pandemic when kids took to doing classwork in (sometimes not super-bright) rooms on the computer. Kids also tend to focus really intensely on screens, and all this prolonged attention can add to that tired feeling.

If you think your child’s eyesight is suffering due to too much screen time, book a kids’ eye exam with us — it’s definitely worth keeping a close eye on their vision during these critical years for learning and development. We’re also happy to talk to you about screen time and advise you on the best plan to limit it with your child.

Previous: How to Properly Protect Your Eyes from UV Rays
Next: What Are Polarized Lenses?