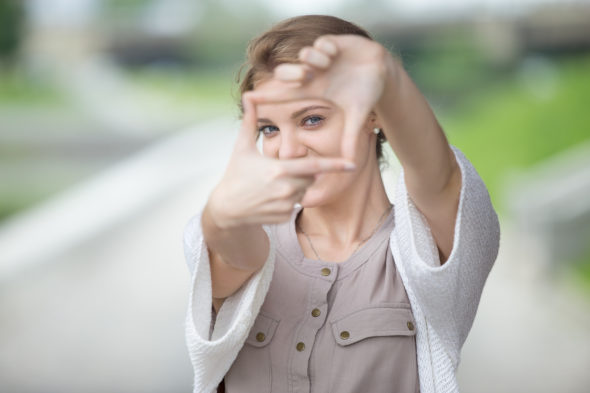 Being able to see inside of the eye is key in properly diagnosing any conditions or medical concerns you may have. When you come to Invision for your annual appointment, we use advanced imaging equipment in order to see what’s going on inside of your eye. Some of it even uses the same technology as NASA! Pretty cool, huh? But in order to have these advanced methods of diagnosis, we first had to lay the groundwork. Let’s hop in our time machine and take a look back at the development of retinal imaging!

In order to be able to take photos of the retina, we first had to be able to take photos in general! The early ancestors of the modern camera were invented in the early to mid-19th Century. Louis-Jacques-Mandé Daguerre completed his invention of the “daguerreotype” in 1837: the first camera that recorded images on iodized silver plates which were then developed with chemicals. This early camera model was impractical for taking photos of living objects due to the length of time required to record an image. By the 1840s, however, people were rapidly improving upon Daguerre’s original design to speed up the exposure process, moving from silver plates to paper and altering the chemical compositions to decrease the necessary exposure time. By the mid-to-late 19th Century, photography had revolutionized the way humans could record the world around them.

Now, back to eyeballs! What’s the first thing you want to do when you get a camera? Take pictures of everything! When photography was first developed (pun intended), people had that exact same instinct. What they found was that taking close-up eye photographs was incredibly difficult. Humans had known for a long time that when light shines in the eye at a certain angle, it will reflect back. You know when you’re trying to take a group photo, and the flash goes off, and suddenly everyone’s eyes are red? That’s because the retina reflects light in order to form the images that your brain sees. This makes photography difficult.

In order to take photos of the eyes, Optometrists needed to invent a new way of taking photos. Doctors began testing out possible solutions as early as the 1860s, but it wasn’t until the 1880s that a successful fundus photograph was taken (although who invented the technology remains hotly debated among historians and doctors). In order to take the photo, Optometrists attached a camera to the patient’s head, and had to wait for a 2.5 minute exposure in order to develop the film. These pictures were primitive, compared to today’s standards, but back then this was huge! No one had been able to record the inside of a living eye before.

As photography continued to advance, so did our ability to capture fundus photography (the fundus is the technical name for the back of your eye). In 1926, the first fundus camera was invented, but it could only photograph a small portion of the eye. For the next 70 years, Optometrists worked to increase the possible angle of the camera, eventually getting to 130 degrees by 1997. And finally, by the 2000s, we get a non-invasive, 200 degree view of the retina. And as cameras moved from film to digital, so has fundus photography. Now, nearly all imaging equipment produces digital images instead of film.

Now, however, we’ve entered the future, and are able to take retinal photography one step further. Optical coherence tomography (OCT) takes a cross-section and detailed photo of a retina using light waves. It shows each distinctive layer of your retina, so you can map and measure their thickness to help with diagnostics. OCT provides a means for recording that is non-invasive while showing the interior of the eye. This is a huge step in being able to accurately diagnose patients.

Retinal imaging is a standard practice for all of our patients. Whenever you make an appointment at our Christiansburg or Salem location, you’ll be treated to an inside look at your eye so we can make sure your eye is as healthy as it can be!

Previous: Sharing Isn’t Always Caring
Next: Annual Eye Exam: Why is it Important?