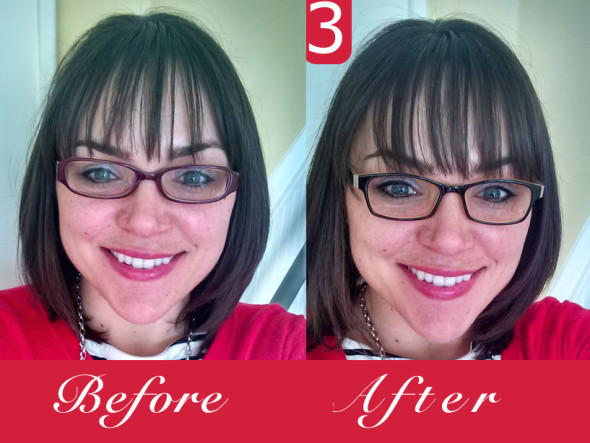 Which Frames Did She Pick?

It had been over 5 years since Caitlyn had purchased frames. The old frames were lacking in style and didn’t do anything to

highlight the great features of her face. Between a full-time career in marketing and business development and being a mother to two small children, replacing her glasses just was never a priority. However, as she explained to us, “one night I realized how badly my lenses were scratched and how my frames were frumpy. I decided I’d really like to feel good in my glasses, good enough to wear them out in public.” We were excited when Caitlyn came to see us for this glasses makeover!

It was a funny moment when Dee and Caitlyn began the frame selection process. Caitlyn pulled her old frames from her purse, placed them on her face and Dee grinned as she said, “We can do much better.” Dee instantly had a pair of glasses in mind that she felt would showcase Caitlyn’s heart shape face and bone structure. The slight curve to the top of the frames opened up her face. They were a classy pair of ProDesign frames, predominantly black but with beige accents that provided a pretty contrast. Caitlyn put them on immediately knew they would be hard to beat.They were fashionable but very classic.

To make sure she made a very conscious and thought-out decision Caitlyn tried on a wide variety of frames, just to be sure about the ProDesign pair. Some of the other frames were LaFont frames with funky features and unique textures. Others were more playful like those from the Kate Spade line. Caitlyn and Dee found a pair of Coach glasses that were comparable to the ProDesign pair but had pretty gold details on the temple piece. Even though they were similar frames the subtle differences evoked a completely different feel. The ProDesign frames made Caitlyn look like she was ready for a meeting in the boardroom, whereas the Coach frames made her look like she was ready for a night out on the town. Ultimately, Caitlyn needed to make a decision based on her personal style and what type of impression she wanted to convey with her frames.

Since Caitlyn was having a hard time deciding we decide to take a creative approach to her decision making process—we asked our Facebook followers for input! The response was fantastic as our Facebook followers weighed in on which pair they liked the best and even explained why. When all was said and done our followers affirmed Caitlyn’s instincts, the ProDesign frames were the perfect fit and style for her look (they were #3!).

Thanks to those of you that voted and helped Caitlyn make this big fashion decision! It was a fun process, both when she was in our office and when we were getting your input over social media. If you find yourself in a situation similar to Caitlyn, desperately in need of a glasses makeover, we’ll gladly help you find the perfect pair of frames for you.